We had been to Benihana, Cupertino,CA for S’s birthday in October 2010 along with his colleague and her husband. Benihana is a Japanese restaurant which follows traditional teppanyaki cooking style. They serve sushi too and has a decent bar. The food is cooked in a rectangular heated hot plates fitted within the table and the dinners are seated around it.Wikipedia defines Teppanyaki as a style of Japanese cuisine that uses an iron griddle to cook food. The word teppanyaki is derived from teppan, which means iron plate, and yaki , which means grilled, broiled or pan-fried. In Japan, teppanyaki refers to dishes cooked using an iron plate, including steak, shrimp, okonomiyaki, yakisoba, and monjayaki. 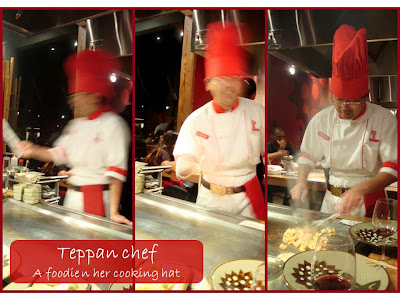 The dinner will be prepared right in front of you at the table by a dazzling chef who would sing, juggle and crack jokes. First, we should place our order with the waiter and once the drinks are served, the chef arrives with a wheeling cart containing meat, seafoods, veggies, sauces, butter and other ingredients needed for cooking .We get to watch the creative chefs cook with twirly knives by fancy chopping, slicing, dicing and flipping the food in the air. The show by the chef at the table was entertaining and funny. The one trick which I liked the most was the “onion volcano”. He creates a good looking onion tower and sprinkles some salt or vinegar (I guess so) to create flames and fumes. (Watch the action of a Teppan chef below) 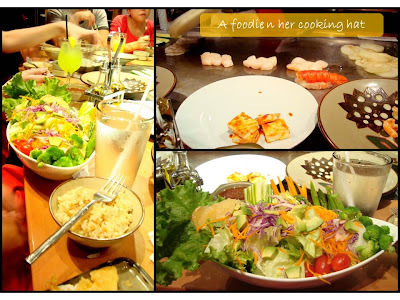 Coming to the food, we ordered spicy hibachi chicken, emperor salad, and grilled tofu, hibachi shrimp,vegetable tempura, Benihana delight. For the drinks, I stuck with fresh lemonade as I was pregnant with my little prince then and others ordered Pinot nair, Domaine Chandon Rosé and Benihana Plum Wine.They serve your entrees with Benihana onion soup, salad, either fried rice, steamed white rice or brown rice, homemade dipping sauce (wasabi and some sweet-spicy red sauce) and Japanese hot green tea.

The food was just fine and definitely not an out-of-the-world taste. The soup was served hot and the taste was not bad. The fried rice was super yummy and I would give it 10 on 10 but the chicken was rubbery lacking any flavor, the tofu was firm and under-seasoned.The salad with wasabi dressing was garden fresh and I loved it. We enjoyed the tempura, little oily but super crispy.

If you dine there for your birthday, they would sing “The Happy Birthday” song in Japanese and English for you and also get a picture taken with our friends/family. As S didn’t know about it, he was surprised when few waiters clapped and sang for him.

The ambience was good, loved the design on the plate and the place was house packed. Live cooking session with chefs would be an attraction for bigger kids but definitely not a great place for toddlers as you have a hot plate right in front of you. 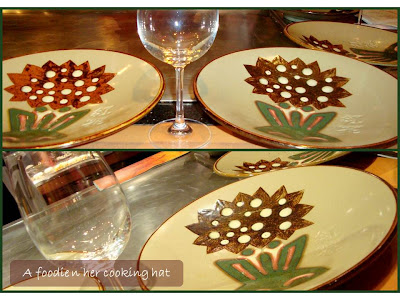 We had made reservations before and didn’t have long waiting time when we arrived. I have heard that they get booked quick. So, it is better make reservations ahead of time. Also, you would be grouped with few other dinners to get seated in a table. Generally the table fits 8, so if you want a private dinner with your girl friend, wife or date, this is not the place to be.

In a nut shell, I would call BENIHANA a special-occasion restaurant because of its priceyness . I found it little too expensive for everyday food and not sure if I would splurge on it for a casual dining. There was nothing great about its food but for the friendly waitress and funny chef, I would give it three out of five .

Note: They have locations throughout US, Latin America and Caribbean.