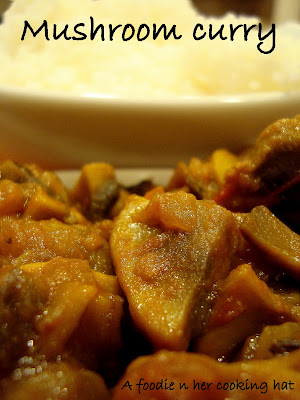 Know what!!! Mushrooms were once believed to the plant of immortality by the ancient Egyptians (4600 years ago). It was the food of royal family and commoners were denied of it. Even in the civilizations of Russia, China, Greece, Mexico and Latin America, the same ritual were practiced. Many assumed that the consumption of mushrooms can produce super-human strength, help in locating lost objects and make you reach the Gods. Initially, edible mushroom were used mainly in Chinese, European and Japanese cooking. But with the migration of mankind across the globe, every region had began to experiment with it. To my knowledge, I have been seeing the usage of mushroom in Indian cooking only from a decade back. If I am wrong, do correct me.

Selection:
1. Fresh mushroom would be firm, plump and would have a smooth appearance.

2. Delicate flavor of the mushroom is indicated by a closed viel under the cap while a richer flavor is suggested by an open veil and exposed gills.

1. They can be stored in the original package only upto a week in a regridgerator. Never freeze the mushrooms. However, you can freeze sauted mushrooms for 15-20 days.
2. If you have opened them, then transfer it to a porous bag for later use. Dont store them in an airtight container as they cause condensation and lead to spoilage.


1. You could brush of the dirt with finger or kitchen towl. Always remove/ trim the stem before use.
2. Never run them through water for long time or soak them in water. Mushroom absorb mositure quickly.

There was once a debate in my house about the classification of mushroom as vegetarian or non-vegetarian one. My mom believed it to be a non-vegetarian dish as they are fleshy and meaty. She really couldnt imagine herself eating them. I guess she has started to eat them – I dont know! (gotta check with her) 🙂 Since its from a fungus family, some vegans do have a problem eating them.

But according to me, mushrooms are delicious and versatile. They are so easy to cook and the addition of Indian spices make them even more delicious. The post for today is an easy Mushroom curry with an Indian twist. The sauteeing is the easiest way to cook the mushrooms. My mushroom curry is a medley of different spices cooked with onions, ginger, garlic and tomatoes. The addition of cummin powder and garam masala gives the extra kick in every bite. The usage of curry leaves in the gravy makes them more South Indian in texture, taste and flavour. When the mushrrom looses the moisture, they tend to shrink in size, hence the addition of salt should be very calculated and its better to add them at the end.

There was a true satisfaction in S’s face as he finished his plate and he was so happy that I cooked it that night. He seems to love its taste and I am sure I would be making them quite often. Honestly, I love cooking for him and I get so excited when he loves my food. 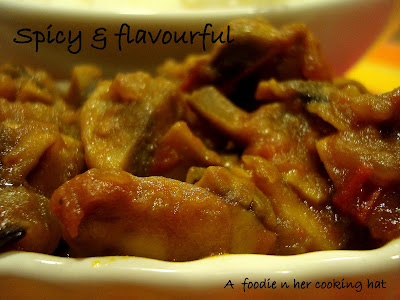 Clean the mushroom, chop off the stem and chop them. Set aside in a bowl.

Heat the oil in a kadai. Once they get heated up, add the curry leaves, onions and green chilly. Cook covered for 10 minutes on a medium flame. Let the onions brown but dont burn them.

Throw in the tomatoes and cook till the raw smell disappears. Sprinkle the turmeric powder, chilli powder, coriander powder and saute for couple of minutes. Cook till the oil separates out of the mixtute.

Add the mushrooms and give it a complete stir. Cook covered on a medium flame for 5-8 minutes. Once they have began to shrink, pour 2 cups of water and 2 tsp salt and cook covered for 10-15 minuted. Spoon out a mushroom piece and check whether they have cooked. They need to be soft and chewy.

Once the gravy begins to thick, sprinkle cummin powder and garam masala. Cook them for another 3-5 minutes. Adjust salt to taste.